Mixing family and work is always difficult. And how difficult it is for those who have lived and breathed the company every day, inside and outside the office, for a lifetime, to tell the story of a company of the likes of Bottaro. What is truly difficult is to be able to step back and look objectively at something that has been such an important part of your life and someone who, in one way or another, has changed that life of yours forever. For a son to tell his father’s story is even more difficult. 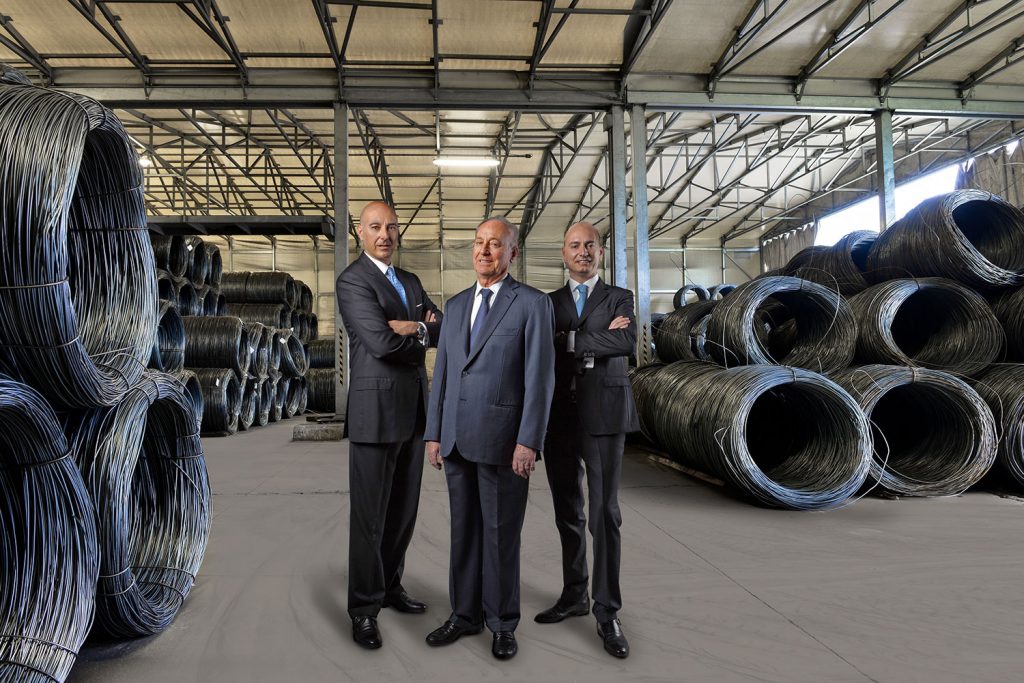 A forward-looking spirit in a man from days gone by

In a few months Mario Bottaro will turn 89 and, day in and day out, you will find him there at his desk in the largest office. What were once a pencil and paper documents in his hands, are now an ultramodern iPad with which Mario, despite his age, uses to maintain full control of his company and continue the work of a lifetime, for which he has sacrificed so much, perhaps too much.

All this makes Mario Bottaro and his company an indestructible combination, founded in 1956.

Exactly, because he built the Bottaro company with his own hands, nail by nail, brick after brick, wire after wire. That down-to-earth boy who at just 8 years of age, fatherless, sent off to a boarding school in Viggiù near Varese, and who, with friends “borrowed” the teacher’s bicycle on the sly, to ride around in the courtyard to feel the thrill of freedom which that instrument gave him; who, with resourcefulness and creativity built miniature radios using matchboxes with a piece of “galena” stone inside, and which, when connected to the radiator with copper wires, would transmit broadcasts like a real radio.
Despite the dreadful period marked by war and air strikes, Mario never underwent any negative influences, and indeed was forged in optimism. A humble boy who dreamed of great goals and who, since then, has never stopped pedalling that phantom bicycle or aiming for increasingly higher peaks. And in life, Mario has climbed some peaks, owing to his passion for mountaineering and having summitted all the Italian peaks over 4,000 metres.

An entrepreneur is born: life according to Mario Bottaro

Great ambition, the willingness to make sacrifices and self-denial at work: three essential requirements for him, in order to achieve a goal in life. A constant factor that Mario also brought to the workplace. No one, in fact, would have ever left an excellent position at the bank to undertake an entrepreneurial path from the ground up, without the economic support of a family and with the war having just ended, yet Mario Bottaro did just that: he left a steady job at the bank to follow his dreams with tenacity, determination and the desire for independence.

Of course, the economic miracle of the second post-war period undoubtedly paved the way for the most enterprising people back then and it was in fact in those years that Mario Bottaro “was born”, as a nail salesman for craftsmen of the day (shoemakers, carpenters and hardware shops). Mario went into all the shops at each doorway, on every single street, to propose his products, presenting himself to his potential customers as the company sales representative. If anyone insisted and wanted to know his name, he replied by giving the surname of a former boarding school classmate, “I’m Arinci, if you ring the company, ask for me“. A moment of foresight, if you will, of what in his future would become a successful B2C business approach based on empathy and trust.

One thing, however, is sure: since that day Mario Bottaro has never stopped giving his all and working hard to build a future for himself.

Investing and innovation: the keys to Mario Bottaro’s success

As the business grew, the entrepreneur also grew and, with a forward-looking spirit, Mario understood that investments had to be made in order to continue to grow. Investing in new premises and land on which to expand the company and investing in a new and innovative product, single-loop bale ties, of which, not accidentally, it became Italy’s top producer and shortly thereafter an exporter in Europe as well.

Curiosity and the passion for travel and knowledge have always been the cornerstones of his success. He was a true “pioneer”: visiting an agricultural fair he saw a bale of hay bound with wire that had a loop at the end. This led to the idea of bringing these single-loop bale ties into the supply chain of recyclers, to make their laborious work easier. The goal was to provide straightened ties cut to measure with a loop at the end. This is how single-loop bale ties came into being and became a national and international success. Even today, 65 years later, they are still used and are one of the products that we export to the UK, the US and Canada.

What’s more, Mario has always believed in and invested in people and youth, in his two sons, Marco and Alberto, who have supported him in running the family business for more than 30 years. They inherited from Mario an absolute dedication to work and a strong sense of professionalism and ethical responsibility towards collaborators, customers and suppliers.

In a word, today’s Bottaro company, leader in the manufacture of wire rod products, took off from there, from that man and his vision of a future to be achieved at all costs before others. A future that has not only been achieved, but largely surpassed. This year marks the 65th anniversary of the founding of the company by Mario Bottaro and today Bottaro has achieved several objectives that it had set for itself: 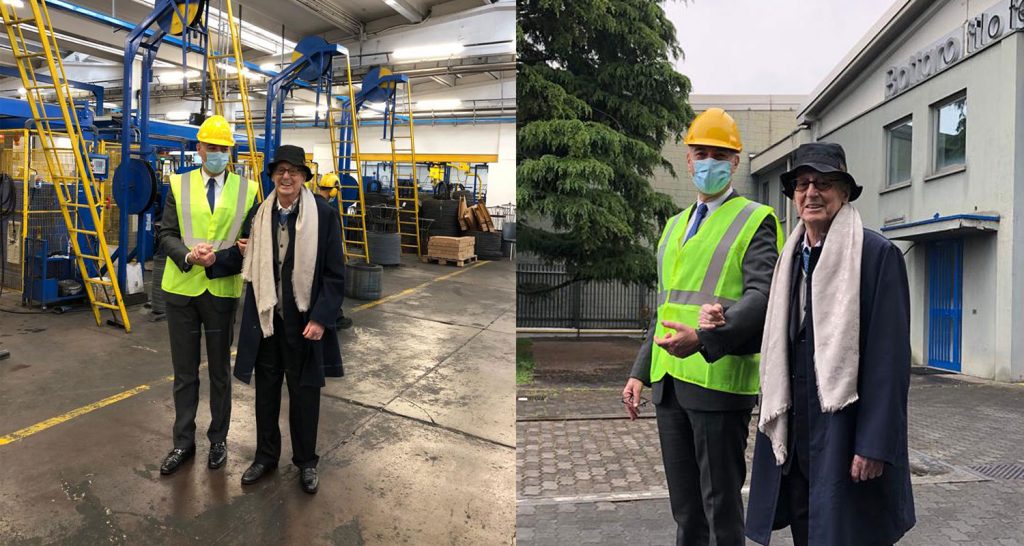 The man and the entrepreneur: Mario Bottaro’s two souls

Today the Bottaro company performs the role that belonged to its founder at the beginning and the slogan WorldWire Maker is literally the materialization of that dream, dreamed about by a young Mario Bottaro, pushing hard on the pedals of a bicycle. But it is also the result of a more mature and special personality that has had to balance his two souls throughout life, that of the entrepreneur and the family.

For Marco and Alberto, the entrepreneur Mario Bottaro was undoubtedly a demanding father. As any father, for that matter. He always expected so much from his children, even excellence, all the more so when they became part of that world that he had built and accomplished with so much hard work. Yet his silent personality, which is always focused on work, does not allow us to truly understand whether, deep down inside, he believes that level of excellence has actually been achieved. We may never know.

One thing is sure: Mario Bottaro did his best. He taught his sons the importance of travelling, of understanding diversity in the world and not to consider it a limit, but rather to always enrich themselves with it; to face difficulties without bowing down; the need to always be present at the workplace and to be paragons of dedication and earnestness; always being fair and punctual in all the commitments made, even those not written and undersigned, especially in financial ones, always investing in human relationships with collaborators, customers and suppliers: these are the lessons that a father-entrepreneur, of days gone by but also innovative, such as Mario Bottaro, has handed down to his children, and these are, in fact, the characteristics that have allowed Marco and Alberto to continue to successfully write the Bottaro story.

A word from Mario Bottaro’s sons

We are Marco and Alberto Bottaro. It can be very complicated for sons to speak about their father.

But what we are today we owe above all to him, our father, Mario Bottaro, a humble and volcanic man, often absent at home because he was focused on the work of a lifetime. A person who built his own success thanks to a great woman, Carla, his wife and our mother. With her he travelled the world for work. They were an inseparable couple and, when she passed away, it was a hard blow for Mario. Our father is a determined man, tenacious and always able to look to the future, to renew himself and learn, even at the dawn of his 89 years, and this is perhaps what makes him unique for us: the humility to acknowledge that you never stop learning in life, even at his venerable age.

A recurring phrase he used until a few years ago when he was travelling for work and they would ask him how things were going, but which is still often used is: “Everything is fine; all that’s missing are money and women!“

We cherish all his teachings, which today we continue to bring to the company with pride and which we materialize daily in our respect for the environment, for ourselves and for the future of our children and grandchildren, in responsibility towards our employees, customers and suppliers, and in constant dedication to our company. So, this is exactly what our father did for us: he made us proud.

So even if you never told us this, we’ll tell you: Well done, Dad! Keep up the good work!